When you hear the name David Austin Garden Roses which variety of his roses are the first to come your mind?

For me it is Juliet. Always Juliet.

I had never heard of David Austin Roses until one fateful day when I was perusing the aisles of flowers at Amato’s Wholesale in Denver, Colorado. I came upon this wrapped up bunch of perfectly ball shaped peach garden roses and had to have it – I grabbed them and added them to my cart. Back at my design studio I placed them in a vase and on my consultation desk so I could admire them. Looking back I would say that took place around 2009.
Here’s the funny thing, at that point I couldn’t sell a peach color palette to a bride for the life of me. They’d all say – Peach?! That’s so 80s. So I let it go and went back to the bright color palettes all the rage in 2009.
Meanwhile, the wedding blogs were gaining popularity (I really have been around a long time, haven’t I?? I remember the days prior to wedding blogs!) I noticed that all the Los Angeles florists were using peach, peach, peach — leading the march towards the now ever so popular and never ending barrage of BLUSH Weddings! The two flowers leading in this march – Juliet garden roses and Cafe Au Lait Dahlias!
How many of you are nodding your heads right now? Who else has been around doing weddings for the last 10+ years?!

A look at how the Juliet Garden Rose blooms open via Alexandra Farms.

Ok, so back to the Juliet Garden Rose. I reached out to David Austin Roses to gather some history on this rose most synonymous with their brand. Here are a few key points about Juliet: 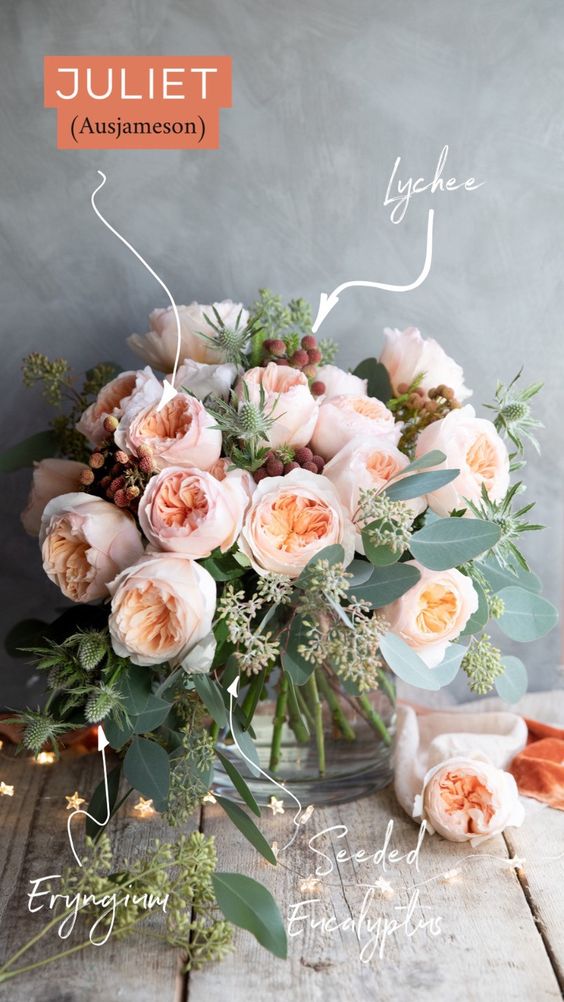 And I inquired, Did David Austin know it was going to be such a big hit and have such an impact on the wedding industry?

To help answering this question, it is worth going back to the beginning of the story …. The vision at David Austin Roses has always been simple: to create and develop more beautiful roses. As a young amateur breeder, in the late 1940s, David Austin set himself the goal of breeding a new kind of rose for the garden combining the fragrant, many-petalled romance of so-called ‘old roses’ with the diverse colors and repeat-flowering qualities of more modern roses.

David Austin comments: “My aim in breeding English Roses has been to develop a rose for more elusive characteristics such as charm and unique character, rather than to focus on attaining measurable factors like greater size of flower or brighter colors, as has often been the case in the past. My
English Roses are available in a wide range of pure, glowing colors, from the softest blush pinks and creams to yellows and apricots, right through to the deepest, richest crimsons. When I started breeding roses, other breeders were allowing fragrance to disappear, so I embarked on a quest to restore scent to the modern rose.”

Since the company’s launch in 1969, David Austin has introduced over 200 new varieties of his unmistakable English Roses for the garden and established an unrivaled international reputation as a breeder and producer with gardening experts and enthusiasts alike. It was this critical acclaim and popular success that inspired the collection of luxury cut roses for wedding and events, which have become known within the industry as garden roses – a name derived from the fact that they were directly inspired by his rose breeding for garden plants that he had already accomplished.

For many years the cut flower market was dominated by modern hybrid tea roses, bred to be at their most beautiful in the bud. These had improved vase lives but lacked much of the character, charm and fragrance we have come to expect from that best loved of all flowers; the rose.

From the early 1990s, David and his eldest son, David J C Austin have been working together with staff at their Shropshire nursery to create a new range of cut roses, which now includes a collection of 14. These 14 flowers are specially tailored to withstand the rigours of wedding and special events while retaining the extraordinary beauty and fragrance that set David Austin Roses apart from any other.

David Junior comments: “Possibly one of the most exciting developments in the company’s history, has been the launch in 2004 of the new David Austin luxury cut roses. Our aim was to bring the beautiful forms and fragrances of old roses back into the world of modern, commercial cut roses. We
carefully developed the requirements for durability of transport, long vase life, whilst retaining the charisma and fragrance of the beautiful English Roses that have been the lifetime’s work of my father. The colors are subtly rich, and the shape of the flowers are unique and romantic, staying true to their origins of the many-petalled blooms loved by gardeners.
We are constantly looking to the future and breeding is central to everything we do. The breeding work never ends.
We continually aim for the perfect rose but we will never achieve it so there is always much work to be done. My father and I believe there are still infinite possibilities and different roses to create.”

When David was asked to name his favourite cut rose he replied: ” I love them all for very different reasons – although Juliet and Patience have a particularly special place in my heart, as they were the first cut rose varieties that made an impression and gave us the belief that we were creating something special. It is these two varieties that are possibly the most widely recognised as being David Austin cut roses.”

David Austin has always believed in what he was creating. He knew that the general public would like what he was doing but he certainly didn’t expect the level of overwhelming support and interest that has been generated for both his roses for the garden and the cut roses for the home and special occasion. It is the magnitude of the popularity that has astounded him.

Juliet remains one of the best-known and most popular wedding flower. The alluring shade of peach has the ability to combine well with any other colour and create a raft of design styles from contemporary minimalist to a natural cottage garden arrangement. It has the ability to change its personality to fit the occasion and style of the event. 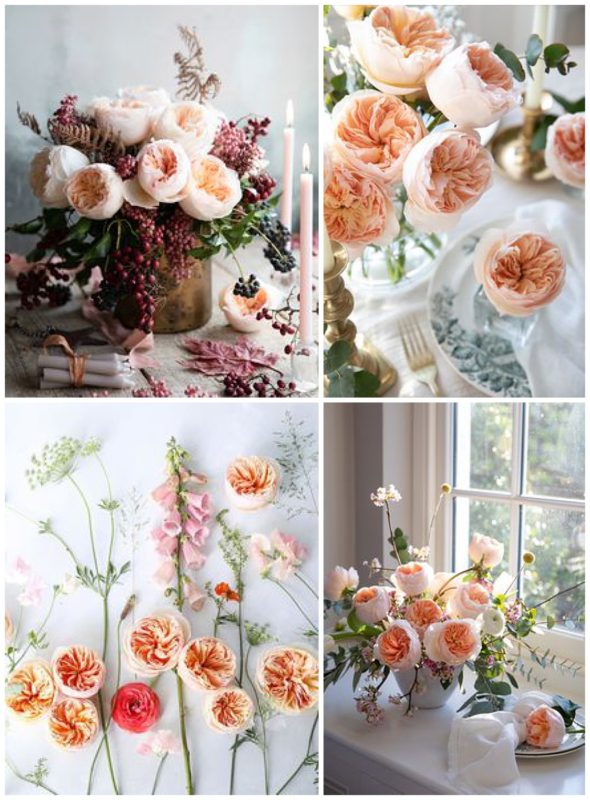