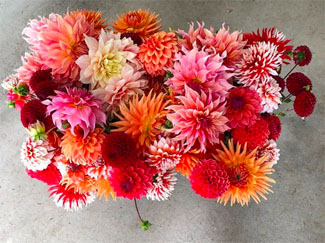 Dahlias from my cutting garden

Musings of a Florist :: visit flirty fleurs on Tuesdays and read a variety of musings by me – Alicia Schwede, editor of the blog.

I’ll be sharing some thoughts of what I’ve learned, what I would do differently, and what I’m thankful for on this flower filled journey I’ve been on since 1998.

Determination
13 months after arriving in Denver I rented a studio and opened @bellafiori
Sometimes I look back and laugh, what was I thinking? Opening a studio when I really didn’t know that many people and hadn’t lived in the area that long. The one smart decision I made was renting a little studio next to a catering company.
I’m not going to lie or make up peachy stories about that first year or two – it was tough! Yes, I had to work a second job to pay the bills while I laid the foundation of my little studio. Back in 2003 there was no social media to freely promote myself. Yes, I had a website but beyond that it was putting myself out there IRL (in real life). I picked up a copy of @weddingsitesandservices which lists every wedding venue and on my days off from job #2 I took the magazine and visited every venue in it – portfolio & cards in hand!

next to venue names as I went down the list. Some venue managers were super sweet & open to me, some were downright snotty. ‘We only work with such & such shop’ & door slammed.
As for the catering company neighbors – a blessing. That’s where I met my dear friend @kayelyssy – sister had my back! I think she often ordered more flowers than she really needed

The other way to get a name out there – ads in magazines, talk about $$$ – holy smokes!
What a difference from today where a solid Instagram feed can launch a business into orbit so quickly – and people come knocking on the designer’s door instead of the designer knocking on door after door.

I wouldn’t change my path though. I was the shyest person 15 years ago, yet wanted something so badly that I was willing to put myself out there over & over again.

I posted this Mark Twain quote in my studio the week I moved in – “Twenty years from now you will be more disappointed by the things you didn’t do than by the ones you did do. So throw off the bowlines. Sail away from the safe harbor. Catch the trade winds in your sails.”